John Solo has been a professional performer for 20 years, although this whole acting thing is a relatively new development. Prior to all of this he made his living as a salesman, engineer, security guard, mechanic, construction worker, purveyor of polyester dress suits... The list goes on ad nauseum, but he prefers to think of himself as an Itinerant Adventurer and loveable scoundrel! When not acting like someone else in front of a microphone, John prefers to indulge in the simpler things in life; games of chance, sword-fighting and traveling the world... all from the comforts of his own overstuffed couch. 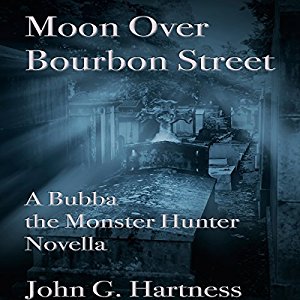 Bubba, Skeeter, Amy and Joe are on vacation in New Orleans when everything goes sideways in the Big Easy and Bubba has to step in and save the day. Between beignets and hurricanes he has to deal with local constabulary, zombies, good vampires, bad vampires (who can tell the difference?), magical murders, a clothing-averse voodoo priest, and the sexy leather-clad Hunter for the Bayou territory. Will Bubba hook up with the delicious Evangeline? Will Amy shoot Bubba's boys off if he thinks about it? Will Skeeter find love in the Crescent City? Will there be more zombies shot, shattered and decapitated than any other Bubba story? Find out, in Moon over Bourbon Street! ...READ MORE